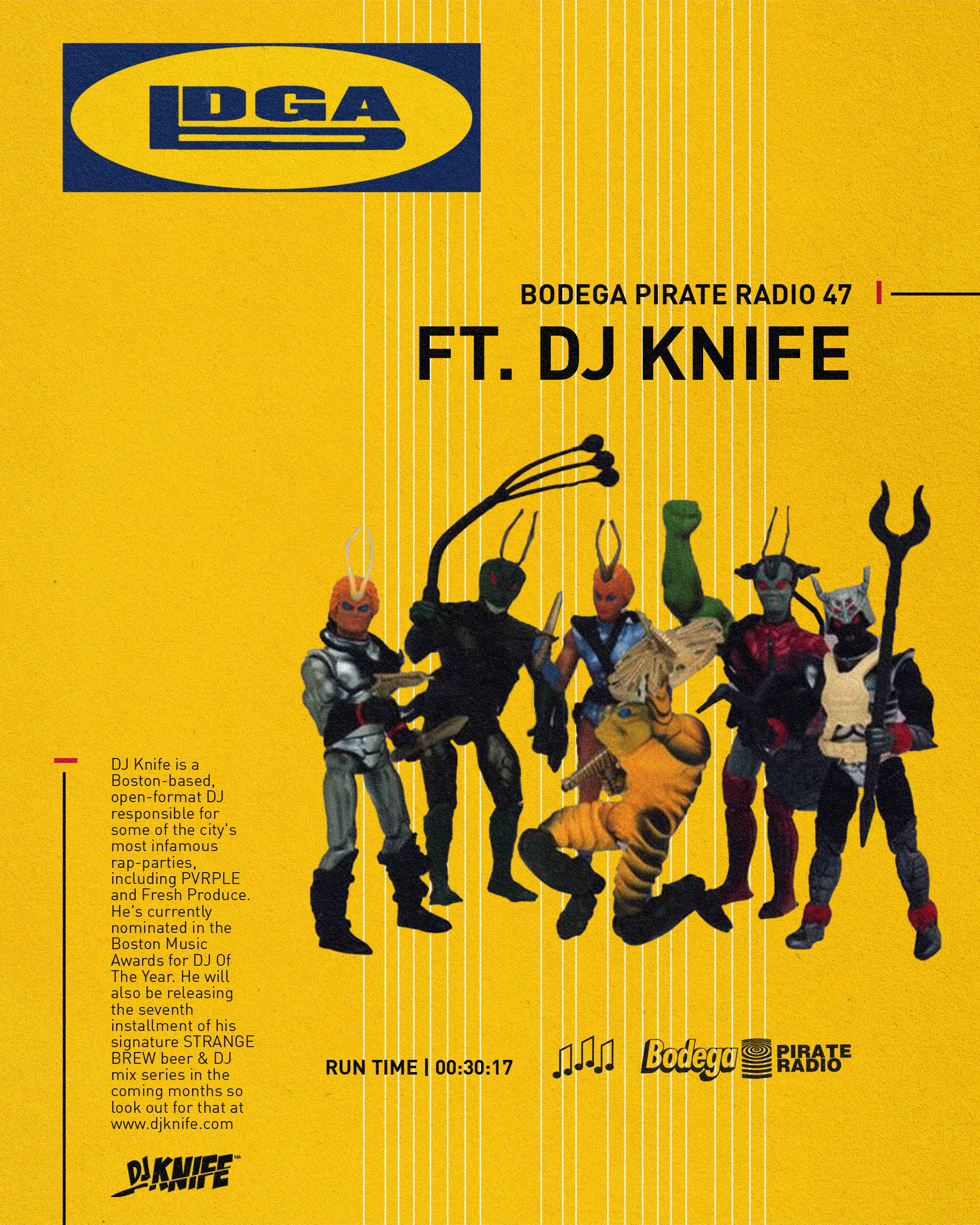 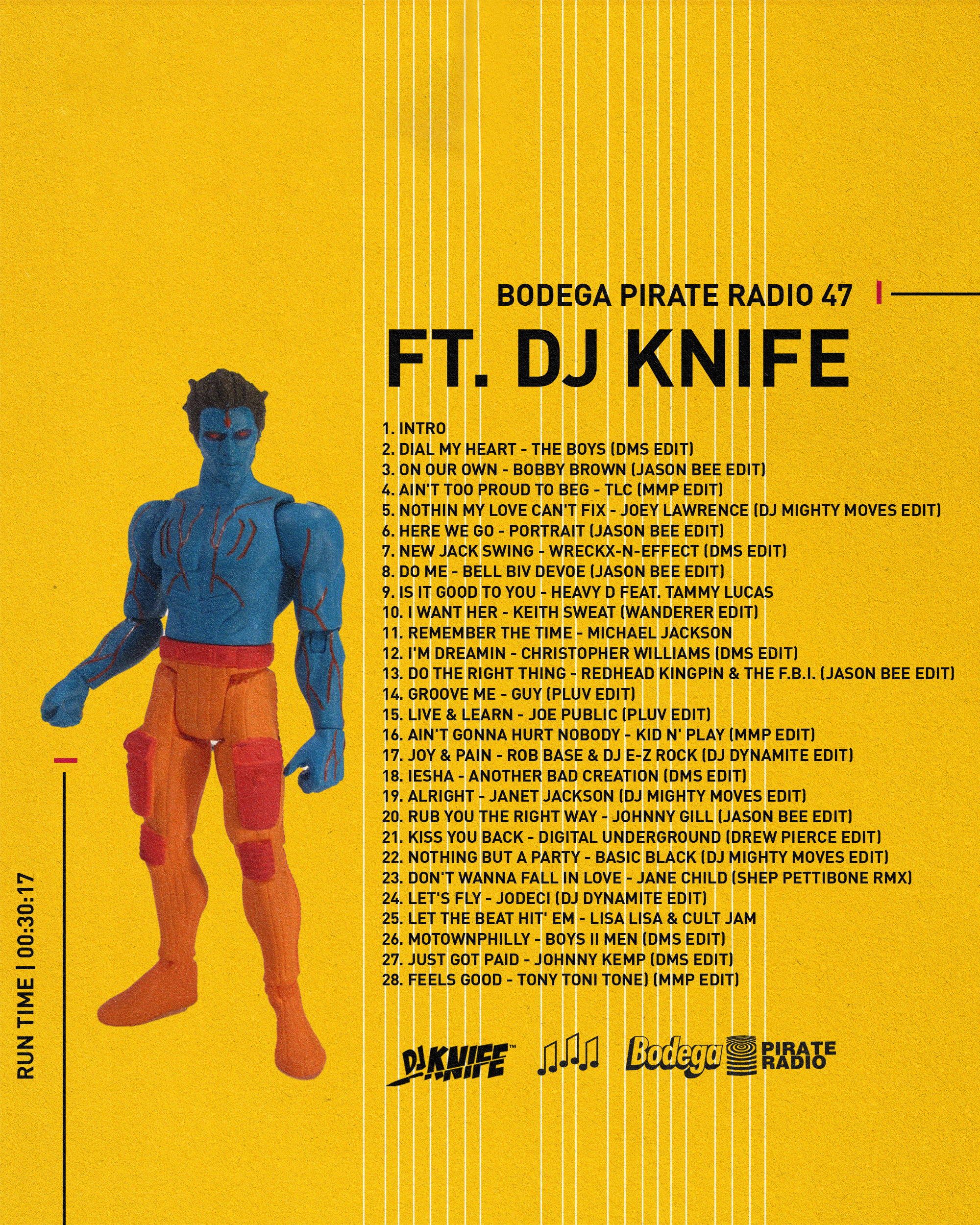 Any attempt at ranking Boston’s best deejays would surely be incomplete without DJ Knife’s name near the top of the list. First cutting his teeth at the old Milky Way in Jamaica Plain, Knife, together with DJ Tommee, came onto the scene with a night they named “Marinate.” Almost two decades later and Knife continues to fill the rooms and venues of Boston and beyond. An open-format selector, quickly able to adapt to any audience, Knife has made his name spinning hip-hop at the infamous and acclaimed rap parties “PVRPLE” and “Fresh Produce.” Despite being a difficult year for a DJ, Knife is finishing this one up strong with a “DJ of the Year” nomination at the Boston Music Awards and his seventh installment of the beer and mixtape series Strange Brew.

A longtime friend and ally of Bodega’s, DJ Knife graciously delivered this exclusive, specially curated mix to help get us through these tough times. A sentimental, reverent blast from the past, Knife’s expertly crafted set takes us on a musical journey back to a simpler, more mellow time when “straight from the barbershop” fades and parachute pants provided the unofficial uniform for an innocent, positive, soulful new genre known as “New Jack Swing.”

Bodega Pirate Radio · Bodega Pirate Radio #47: DJ Knife New Jack Swing Mix
How you got into deejaying? I assume it began with a love of records.
I grew up on hip-hop, but I really got into deejaying during the rave days (I'm ancient). My first memorable exposure was watching DJs spin Jungle on vinyl in Canada, Philly and Upstate New York. That culture blew my mind. So as soon as I scraped up enough cash, I got my first pair of Technic 1200s.
Are you still able to find joy in discovering new music?
For me the most recent find is just new DJ techniques and audio-editing software. I've had a lot of downtime during this pandemic. Shortly after COVID hit, I took 3 months off from DJing to explore career options. Now I'm getting back into DJing and learning new things. Also, I can listen to full albums again and enjoy them, instead of just downloading songs and filing them away. So that's new again.
You have been known as one of Boston's best for quite some time. Who did you look up to starting out?
Thanks! My biggest influence was my former DJ partner, DJ Tommee, from Buffalo NY. He DJ'd the hip-hop rooms at raves and used to enter battles back in the day. He taught me everything that I know. When he moved to Boston we started a party called Marinate at the old Milky Way in Jamaica Plain. That's where I got my start.
Do you remember your first set?
My first gig was an eviction house-party at a home on Sheridan St. in JP in the early 2000s. The house was trashed. I wrote out my DJ set along with the BPMs on a piece of paper. As soon as I put the needle on my first record the cops busted in and ended the party.
How have you seen djing, and specifically, deejaying in Boston, change over time?
As technology changed, DJing became more accessible to everyone. Back in the day, you had to save up for turntables and a mixer. You bought two copies of every rap single on vinyl. All of that was expensive as hell. With the rise of new software and controllers, it became cheaper and easier for a new generation to get into DJing. It made it easier to DJ and also to DJ in venues in Boston that may not have been suitable to play at in the past. Fast-forward to now, the only positive thing about the pandemic when it comes to DJing is that it has cleared the musical pallet for DJs everywhere I think. They are spinning music for themselves that they enjoy, instead of playing the Billboard Top 50 for a buck.
How has the way you approach your set changed over time?
Since music moves so fast nowadays, I try to wait until the last minute before downloading songs for a club atmosphere, prior to COVID of course. People often request things that were released in the last 24 hours and I always try to have those songs on deck. Other than that, I'm less likely to be lugging turntables around and more likely to be checking TikTok to try and anticipate what crowds want.
3-5 songs that help define you.
(In no particular order):
1. Constantly Hating - Young Thug & Birdman
2. Some Cut - Trillville
3. Quicksand - The Story So Far
4. Chicken Huntin' - Insane Clown Posse
5. Don't Walk Away - Jade
Songs that you always try to include in your set?
As often as possible, I try to slip in an early-2000s Crunk / Dirty South segment to my live sets (in front of a crowd that is)....so that often includes "Wipe Me Down" by Lil Boosie, "No Problem" by Lil' Scrappy and "Knuck If You Buck" by Crime Mob.
This mix really takes me back to radio days. Tell the kids about New Jack Swing. What do they need to know?
Obviously Teddy Riley pioneered the sound. These songs are all late 80s / early 90s. The energy is infectious and the vibe is positive. These songs are ALL classics.
It's interesting because with very few exceptions, most of these songs aren’t played on the radio anymore (even during throwback hours). What does this mix mean to you sentimentally. And be sure to mention Joey Lawrence (haha).
Again...I'm washed. So this is music I grew up on and would hear roller skating or on Yo! MTV Raps, (minus the Joey Lawrence track). A friend told me recently they premiered that Joey Lawrence song right after an episode of Blossom, but luckily I can't verify this lol. (Kids: Blossom was a terrible TV show that came out before you were born that you should NOT look into).
And now for the most hated question of all... describe your set?
It's fast, that's for sure. I apologize in advance for my ADD quick-mix style. I tried to cram in as many joints in a 30-minute period that I possibly could.
For more info check out: www.djknife.com