50 Shades of Teal: The Hits and Misses of Sports Logo Redesign

As crotchety old, back in my day sportswriters never tired of pointing out, "people used to dress in suits and ties to go to a game."

Even when the prevailing fashion mood turned casual, it still wasn't common for the stands to visually reflect the uniforms being worn on the field of play. When the officially licensed team apparel business took off, it changed the visual landscape of sports, both inside and outside of stadiums and arenas. Team gear became popular enough that actual sports fandom became incidental. What really mattered in fashion was how cool it looked. 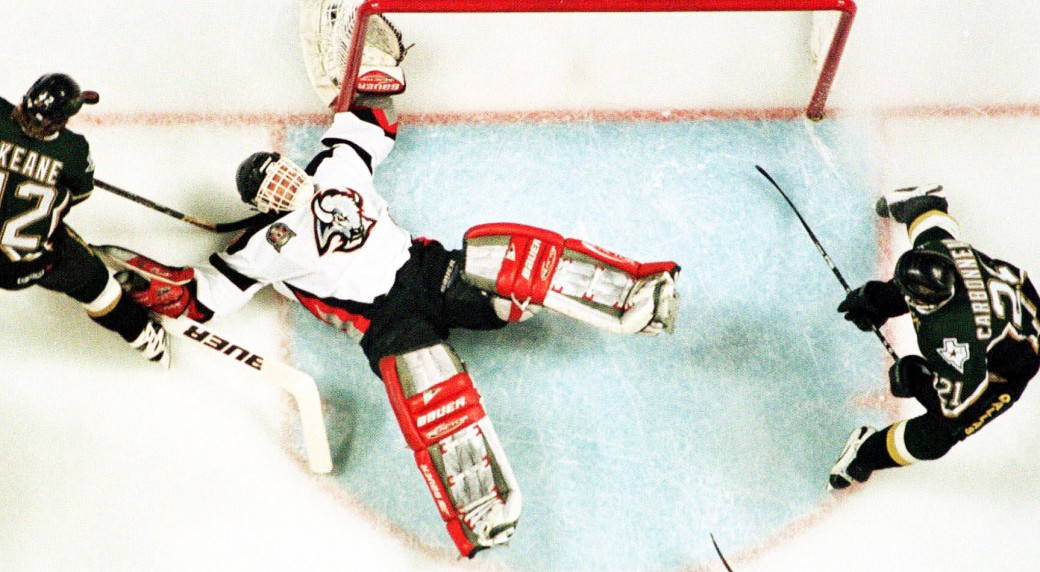 In turn, team uniforms were changed by this new era of marketing and maximizing revenue, as many franchises gave themselves makeovers, in an attempt to become the next L.A. Raiders or San Jose Sharks success story. Some of these attempts were more successful than others. The world of sports, like everything else at the moment, is on indefinite pause, but obsessing over the finer points has never had an offseason. So, there's no time like the present to dig into the best and worst redesigns that took place during the '80s and '90s team gear golden age. 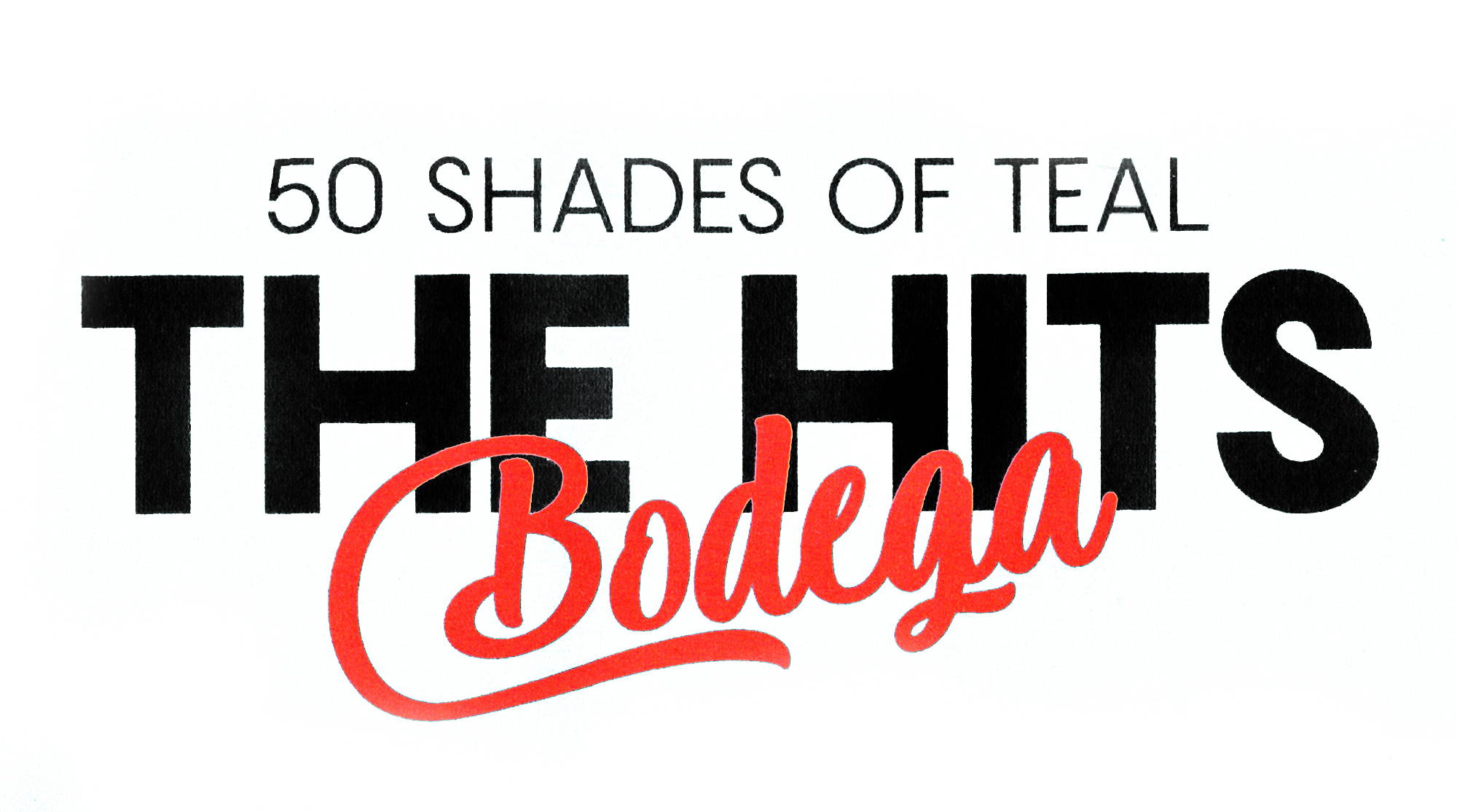 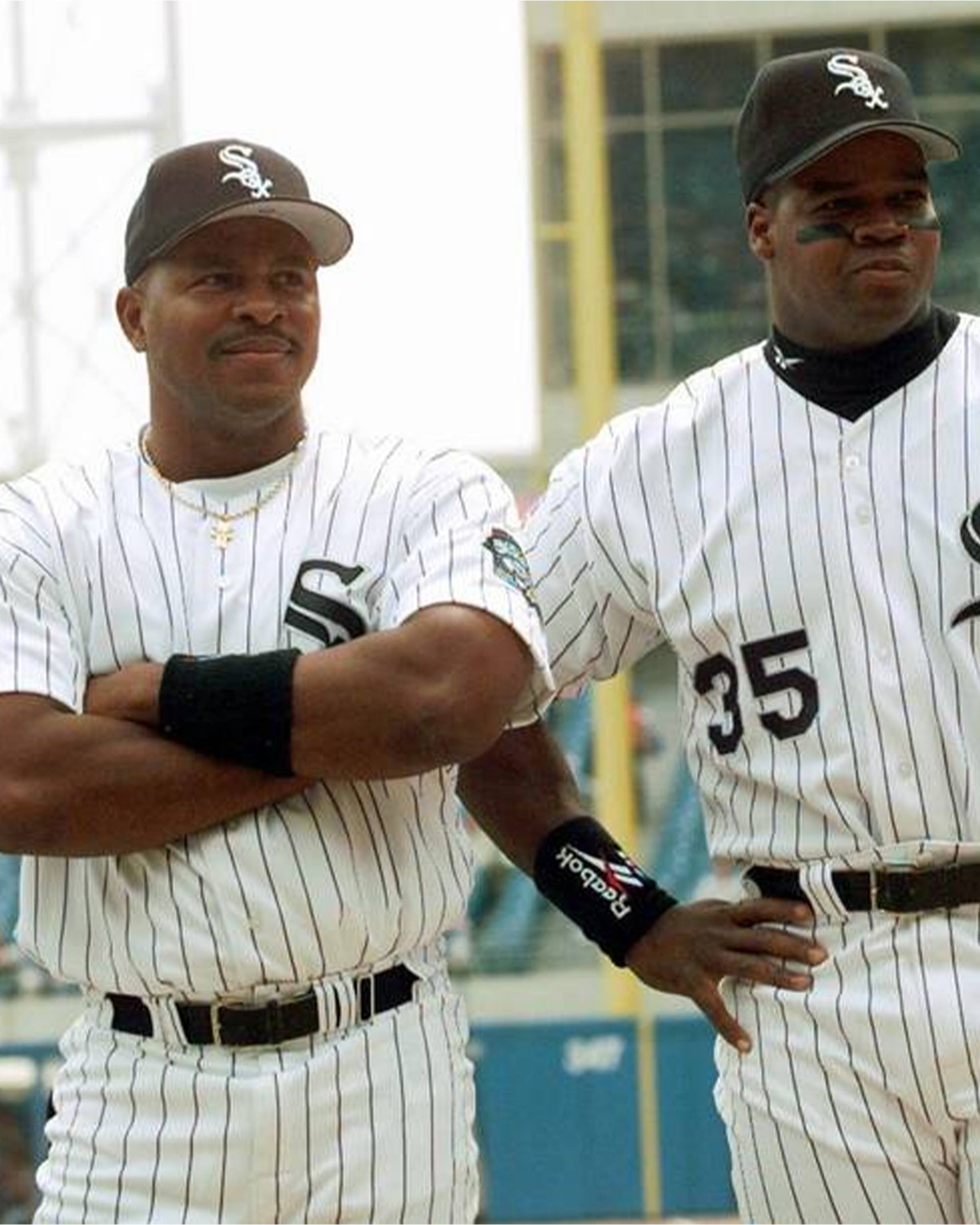 A textbook example of going from complete irrelevance to best-seller overnight. With the Cubs soaking in the lion’s share of Chicago’s baseball spotlight, it seemed like the last instances when the White Sox appeared on the front pages were the days of Shoeless Joe Jackson and the Black Sox World Series scandal, and then their 1959 World Series loss to the Dodgers.Over the decades, the White Sox lurched from logo to logo and once owner Bill Veeck took the reigns of the franchise, from publicity stunt to publicity stunt. By 1990, the White Sox had settled into a completely generic look, white, navy blue and red color scheme, "SOX" spelled out in a forgettable typeface, suitable for a total afterthought of a baseball team. Then everything changed. In 1991, the White Sox opted for an old school, black and white color scheme, and a gothic script logo that hadn’t been seen since the early 60s. The new look's adoption in the aggressive culture of '90s rap allowed the "other" Sox to become, pretty much, the Raiders of baseball.

The cynical take on fashionable redesigns is that they are done purely for the sake of boosting merchandise revenue, with no thought to the history or traditions of the team. That’s not always false, but, sometimes, a total overhaul clicks totally into place. Case in point, the Los Angeles Kings. From their 1967 inception through 1988, the Kings played in traditional royal purple and gold colors that complimented their royal name, and matched the popular, established L.A. Lakers basketball team. On paper, this all made perfect sense, but the considerably larger amount of body coverage offered by the hockey uniform made this bright palette a bit milquetoast.The arrival of Wayne Gretzky in a blockbuster trade with the Edmonton Oilers changed everything.   It was difficult to imagine the Great One showing off his powers dressed head to toe in purple or yellow. With this opening, new owner Bruce McNall sought to capitalize on the popularity of a different city neighbor, the Raiders, and a sleek, aggressive new identity was put in place, one that became the quintessential Kings look. After some more tinkering through the late 90s and 2000s, for the 2011-12 season, the Kings debuted a look based on the 1988-98 era uniform, and immediately won a Stanley Cup. Coincidence? 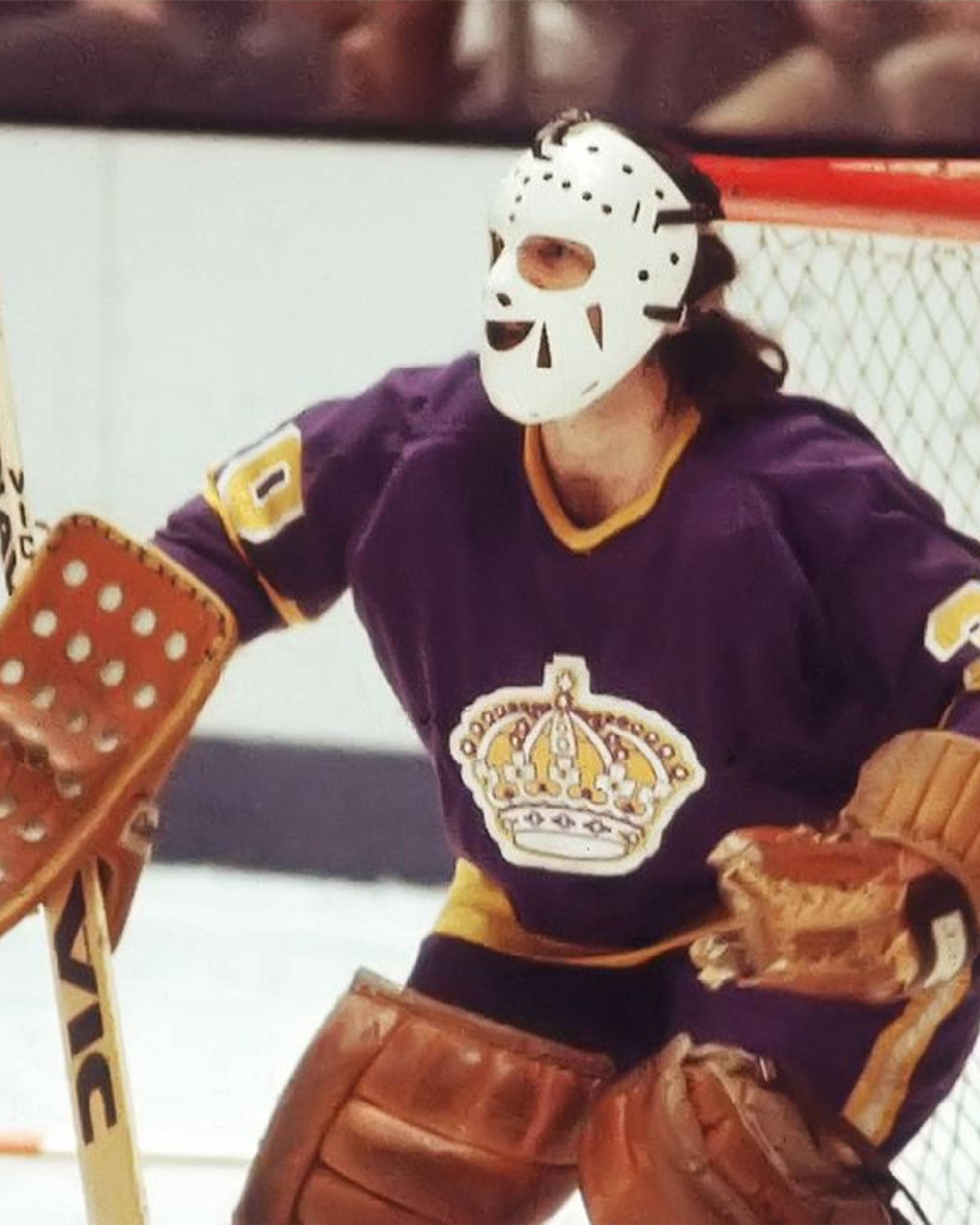 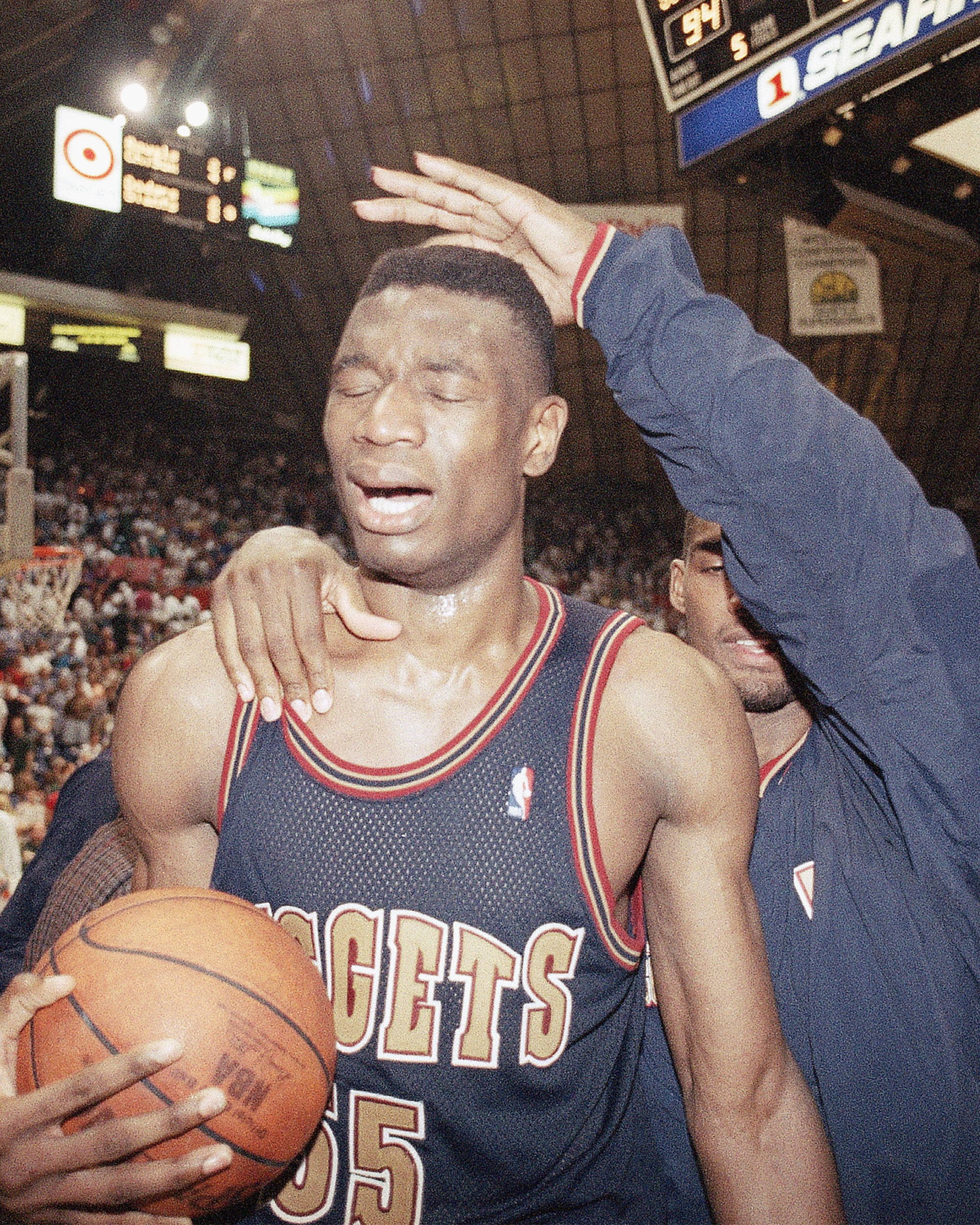 As evidenced by the demand for merchandise featuring the design, there is, admittedly, a simple, retro charm to the 8-bit style of the Nuggets’ 80s logo. By 1993, however, the skyline logo was at the end of its original run. It wasn't so much old school as it was a dated look for a not very good basketball team, and something had to change. What replaced it was an underrated but nearly flawless makeover that relied on none of the trendy gimmicks of the time.The rainbow colors of an Apple IIe graphics card were swapped out for navy blue and dark metallic gold with deep red accents, while the jersey text was changed to a geographically appropriate, western inspired typeface that perfectly captured the Rocky Mountain, outdoors spirit of the name Denver Nuggets. It also helped that the high point in franchise history, the stunning, first round upset of the number 1 seeded Supersonics, occurred in the first season of this new look.

Sometimes, the need for a fresh start is as much of a mental thing as it is an aesthetic thing. The ‘creamsicle’ Bucs uniforms featuring the classic Bucco Bruce logo were, perhaps, the most unique look in the NFL, and still retain a core of loyalists to this day. No one was ever going to confuse the Buccaneers with another team. The problem was, apart from the odd successful season, the Tampa Bay Buccaneers were synonymous with losing. Not just regular losing either, but the kind of seemingly permanent, hopeless futility that clouds an entire franchise. If your team lost to Tampa Bay, you immediately needed to know what cosmic tomfoolery could explain such a disastrous event. Ahead of the 1997 season, the creamsicle color scheme was exchanged for a unique combination of dark red, pewter, and a splash of orange, and Bruce was put out to pasture in favor of a more menacing jolly roger/ crossed swords logo. The new look turned out to be a statement of intent. A talented squad, featuring young talents like Warrick Dunn and Warren Sapp opened the season with five straight wins, and won their first playoff game since 1979. 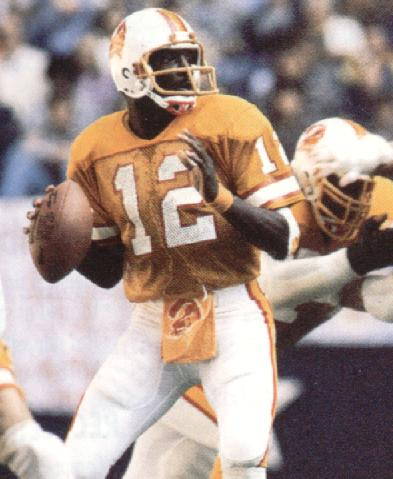 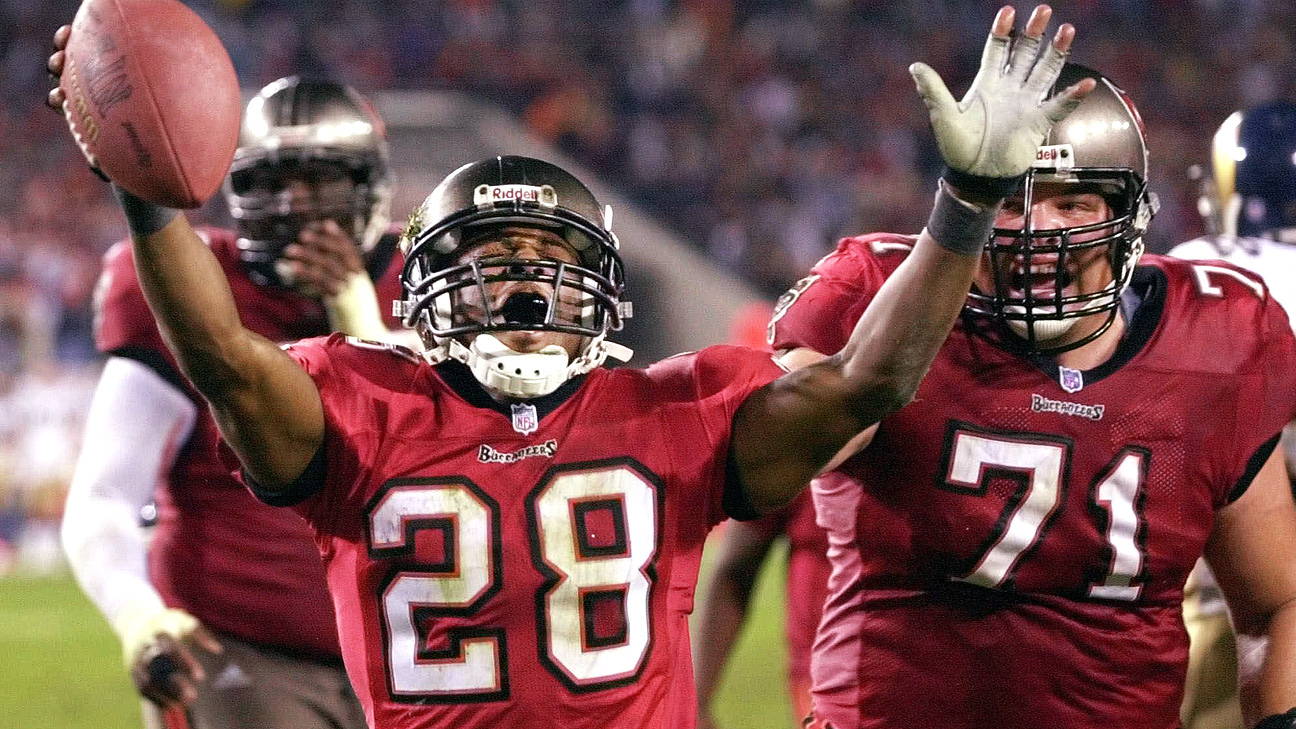 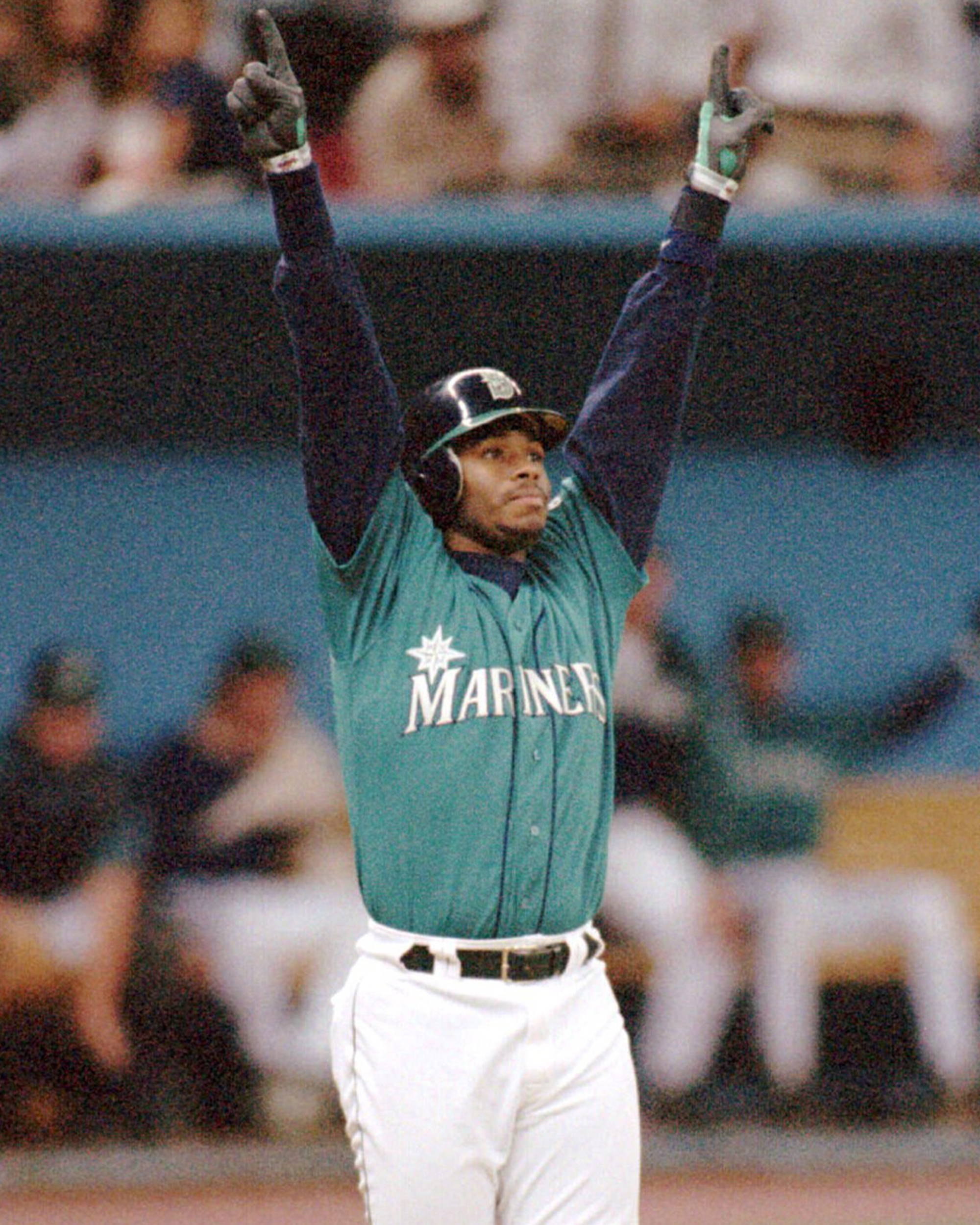 Far too many teams may have leaned on shades of teal during the 90s, but when the color was a natural fit, as it was for the Seattle Mariners, it was easy to see why there were so many imitators. The Mariners franchise was established to settle a lawsuit against the American League after the old Seattle Pilots skipped town to become the Milwaukee Brewers. As might be expected of a franchise with such an inauspicious beginning, the Mariners were largely a non-entity, failing to record even a single winning season, prior to the arrival of superstar rookie Ken Griffey Jr. As the nucleus of a young, talented team came together, the Mariners dropped their generic blue and yellow uniforms for a new, nautical compass/baseball logo and a striking navy blue and “Northwest green” color scheme that stood out against the largely traditional looks of Major League Baseball. The natural connection to the Pacific Northwest surroundings and nautical nickname made this not only one of the best redesigns, but one of the strongest uses of teal, in general. 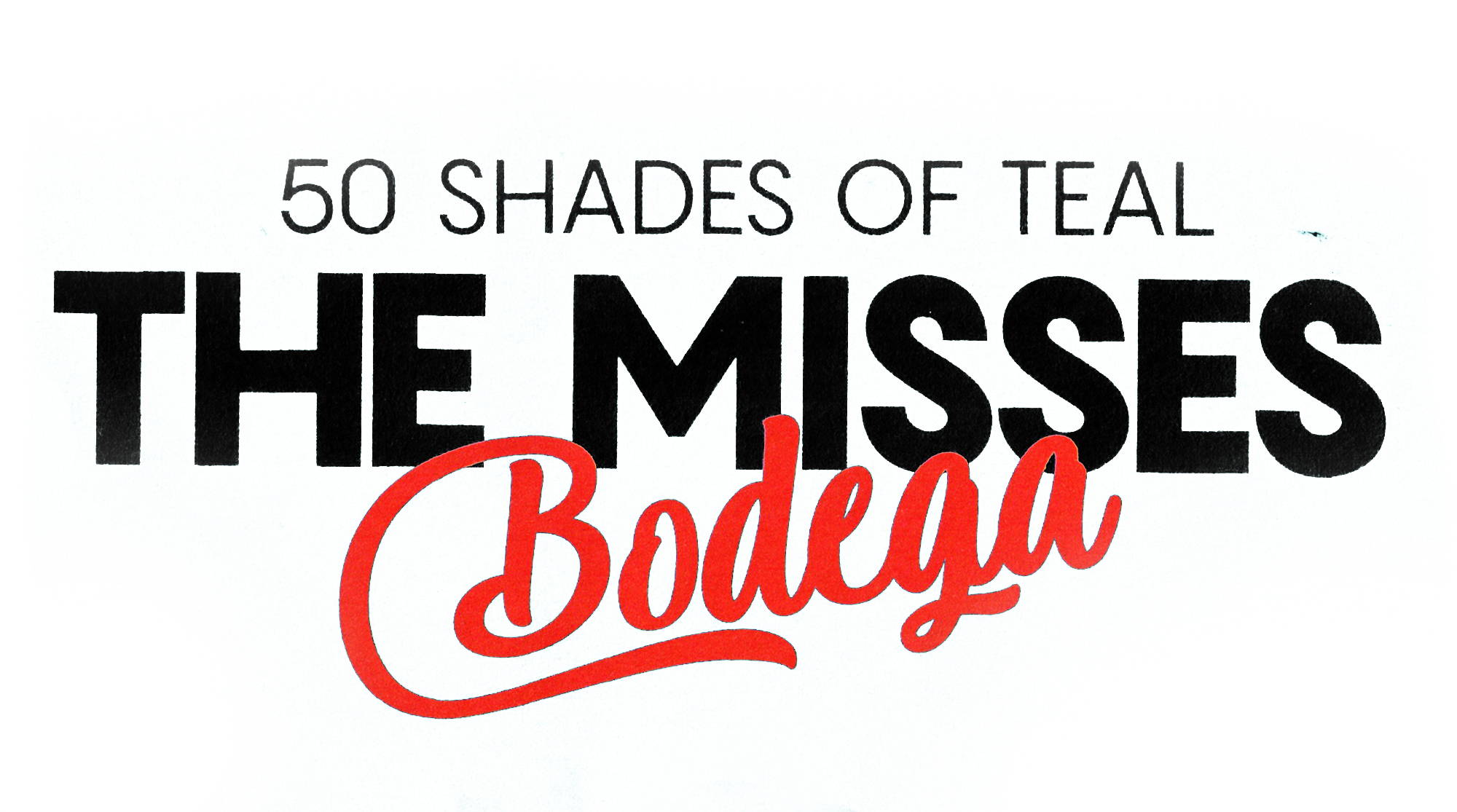 You want to know why the message of so many after school specials and kid’s books is “be yourself?” Because, when you go off chasing the silver and black trend in an attempt to make a quick buck, you end up ditching a perfectly good, dignified identity that you’ve had since day one in favor of an “attitude” heavy alleged buffalo that looks an awful lot like an angry cow trying to sell some variety of 1990s, radical hamburgers. The officials must have let that controversial, skate in the crease Bret Hull goal stand in the deciding game six of the 1999 Stanley Cup Finals so they wouldn’t have to spend any more time looking at these uniforms. It serves the Sabres right that they had to suffer through the even worse “Buffaslug” era, as some kind of sartorial penance, before finally getting back to their superb original logo. 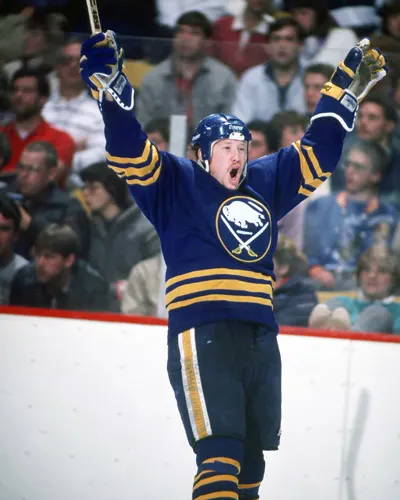 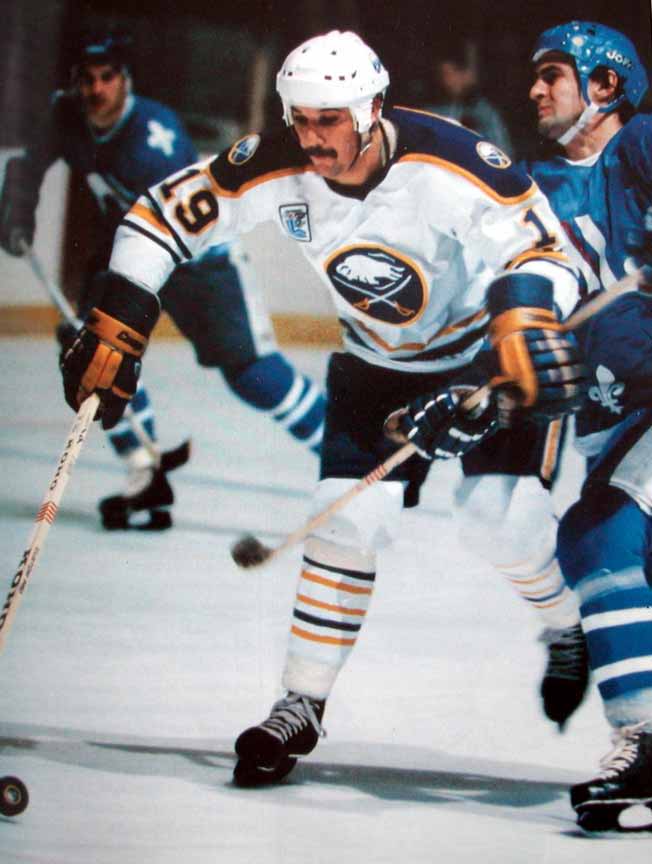 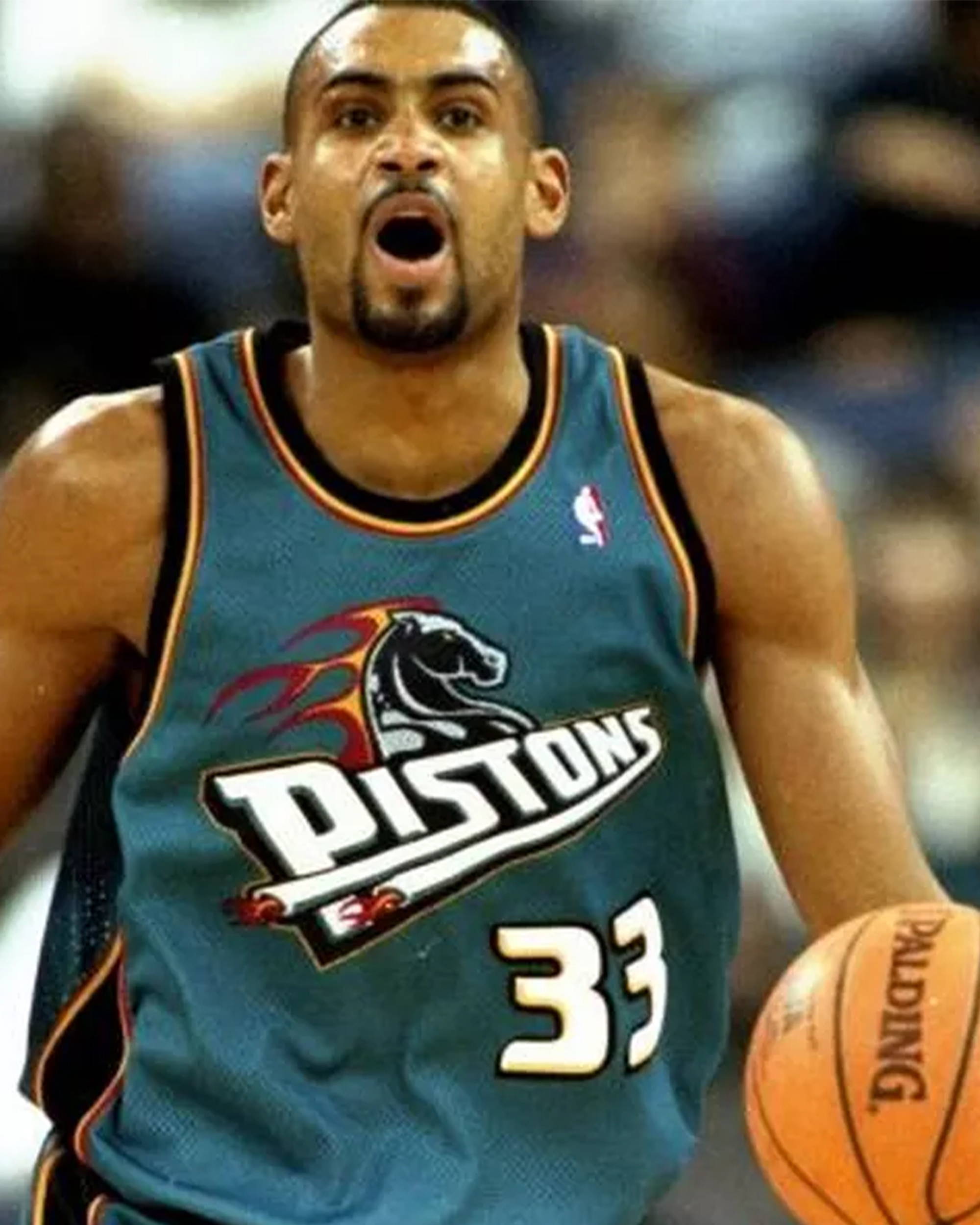 The Detroit Pistons were languishing in post Bad Boys mediocrity when they decided to freshen up their look. In all honesty, the Pistons sported one of the most simplistic logos in the entire NBA, and the whole horsepower thing wasn’t a bad concept, at all, for the Motor City, but the color change just killed this off from the get go. This was simply teal for the sake of teal, and by the 1996-97 season when this look debuted, teal wasn’t even a novelty anymore.

There is an argument to be made that by 1993, the Milwaukee Bucks were due for an update. “Cute,” “quaint,” “charming,” whatever descriptor you want to attach to the gloriously old-school cartoon buck logo that had represented the team since 1968, it wasn’t what sold in the 90s. The Bucks weren’t exactly lighting the world on fire on the court either, so, fair enough, change was in the air. Whether or not the Bucks had to relegate hunter green to the margins of their new look so they could trot out a garish purple monstrosity in its stead is an issue that remains up for debate. Replacing the basketball-spinning buck with a generic, vectored image that looks like it belonged on a billboard for “Sportsman’s Paradise” or some other place that sells orange vests and shotguns, didn’t win them any points either. 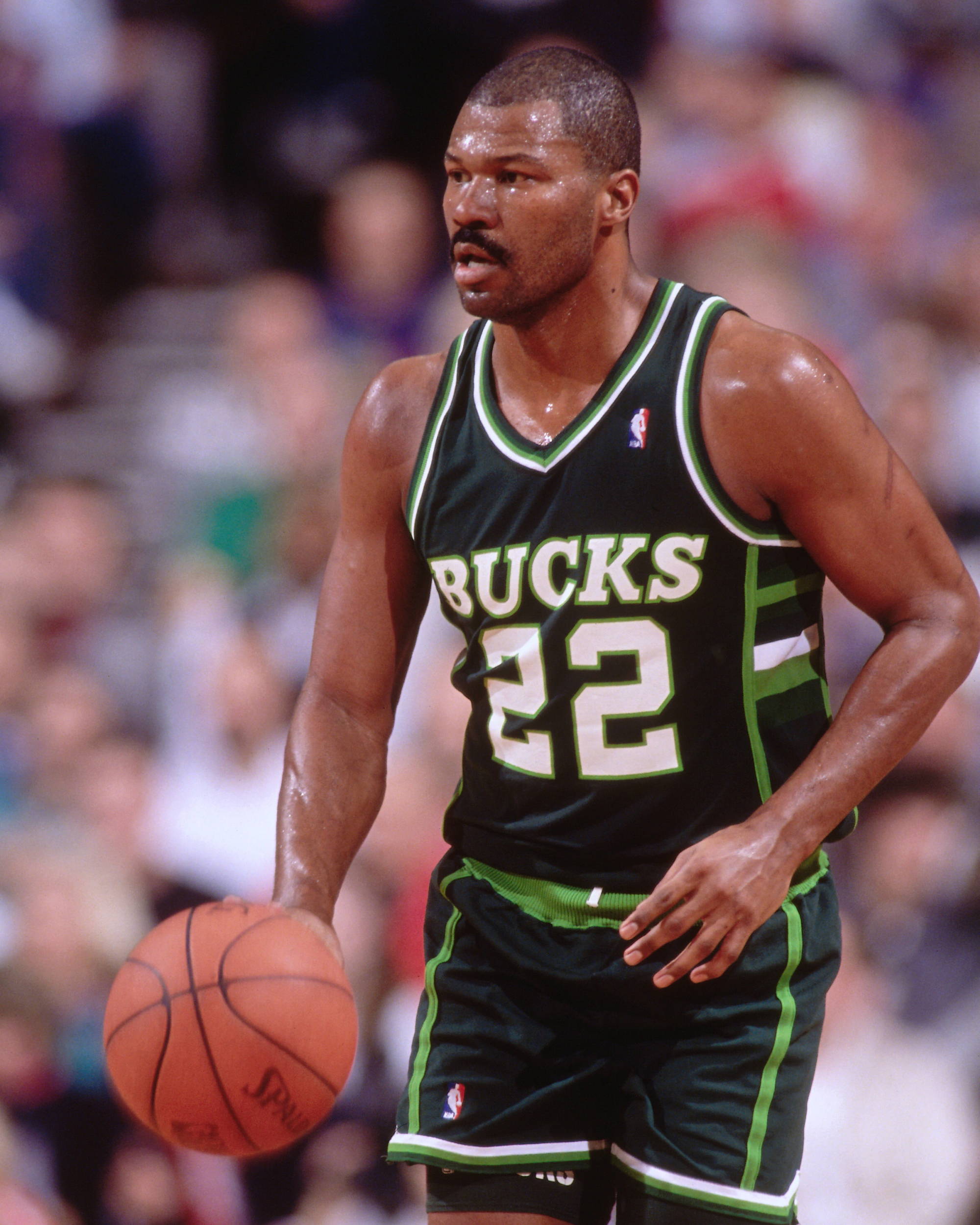 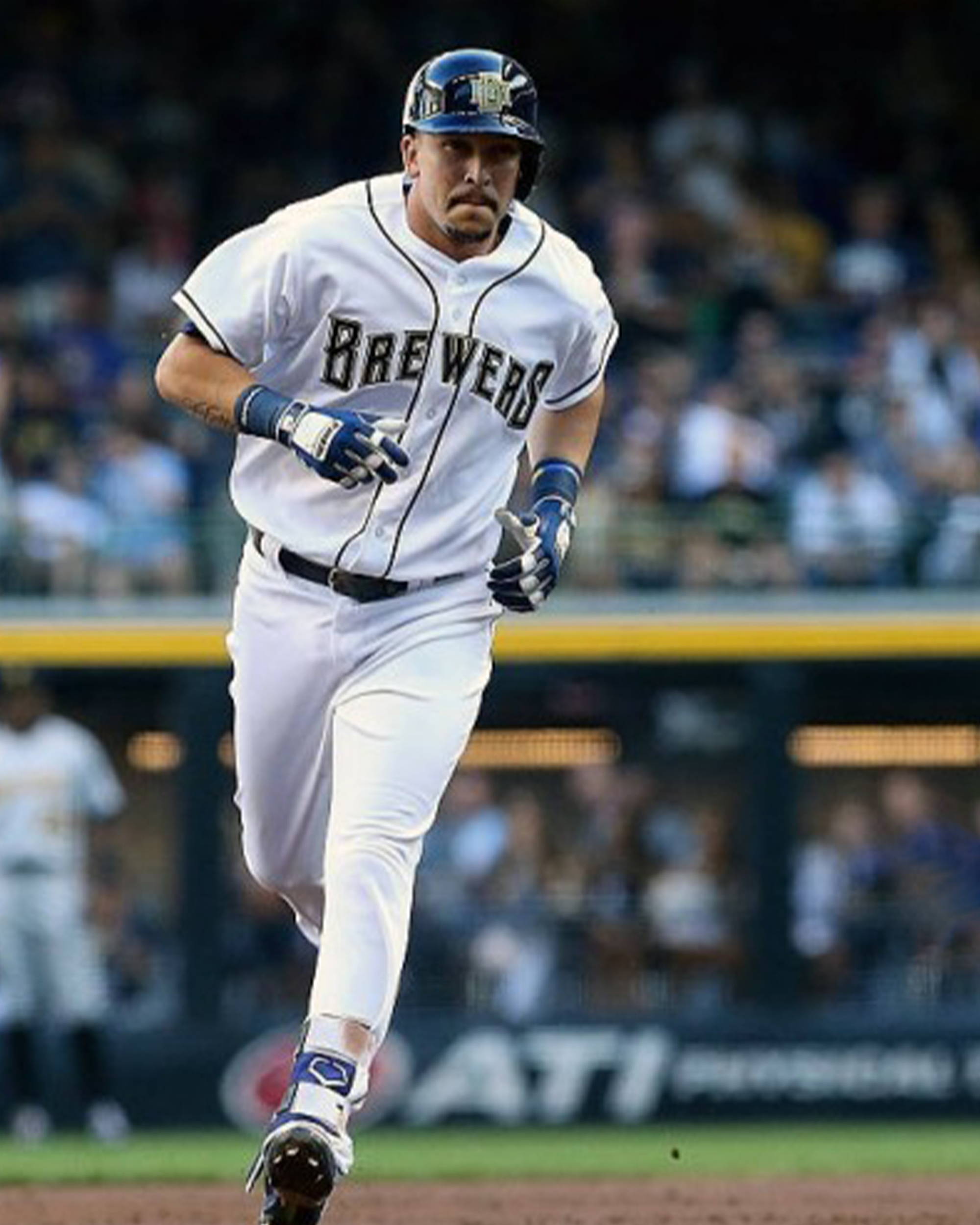 Maybe there was some bad Schlitz going around in 1993 Wisconsin, because the Bucks wouldn’t have had to travel very far to find a partner in rebranding crime. Another Milwaukee fixture with a quaint, if dated logo, the Brewers update ended up making them the imitation brand soda of professional sports. Not that Notre Dame needed the help, but the rise of officially licensed sports apparel made the college football icons more visible than ever. In fact, their gear was so popular, that someone decided that cribbing their colors, plus the addition of a teal hat brim, and interlocking letters would be a solid move for a professional baseball team a few states over. “Motre Bame” was born. The baseball glove and ball that formed the letters ‘m’ and ‘b’ was pretty old fashioned, but it definitely deserved a better replacement than this.

We finish off with perhaps the single most infamous uniform change the era had to offer. NHL jerseys were enjoying a pop culture moment in the '90s, so, in 1996, the New York Islanders decided to retire the Long Island/hockey stick logo and blue and orange colors that they had won four consecutive Stanley Cups wearing from 1980-1983 for something more attention grabbing. They got more than their share of attention all right. What took the place of the Islanders’ championship legacy? Fish sticks.

Laughingstock does not even begin to do justice to the amount of ridicule this Gorton’s Fisherman knock-off subjected the Islanders to, and at a time when the Islanders were going through a protracted down period on the ice. Opposing fans, especially rival Rangers’ fans, actually changed “we want fish sticks” on a regular basis. The fisherman was just the tip of the iceberg for this Titanic of graphic design though.

New uniforms were brought out to go along with the logo. Spoiler alert, they added teal, but the truly eye catching feature was the distorted, wavy, hem stripes, and text that followed these contours. Maybe the concept was to create a visual representation of seasickness. By the 1998-99 season, the psychedelic Gorton’s Fisherman uniforms were never to be spoken of again. 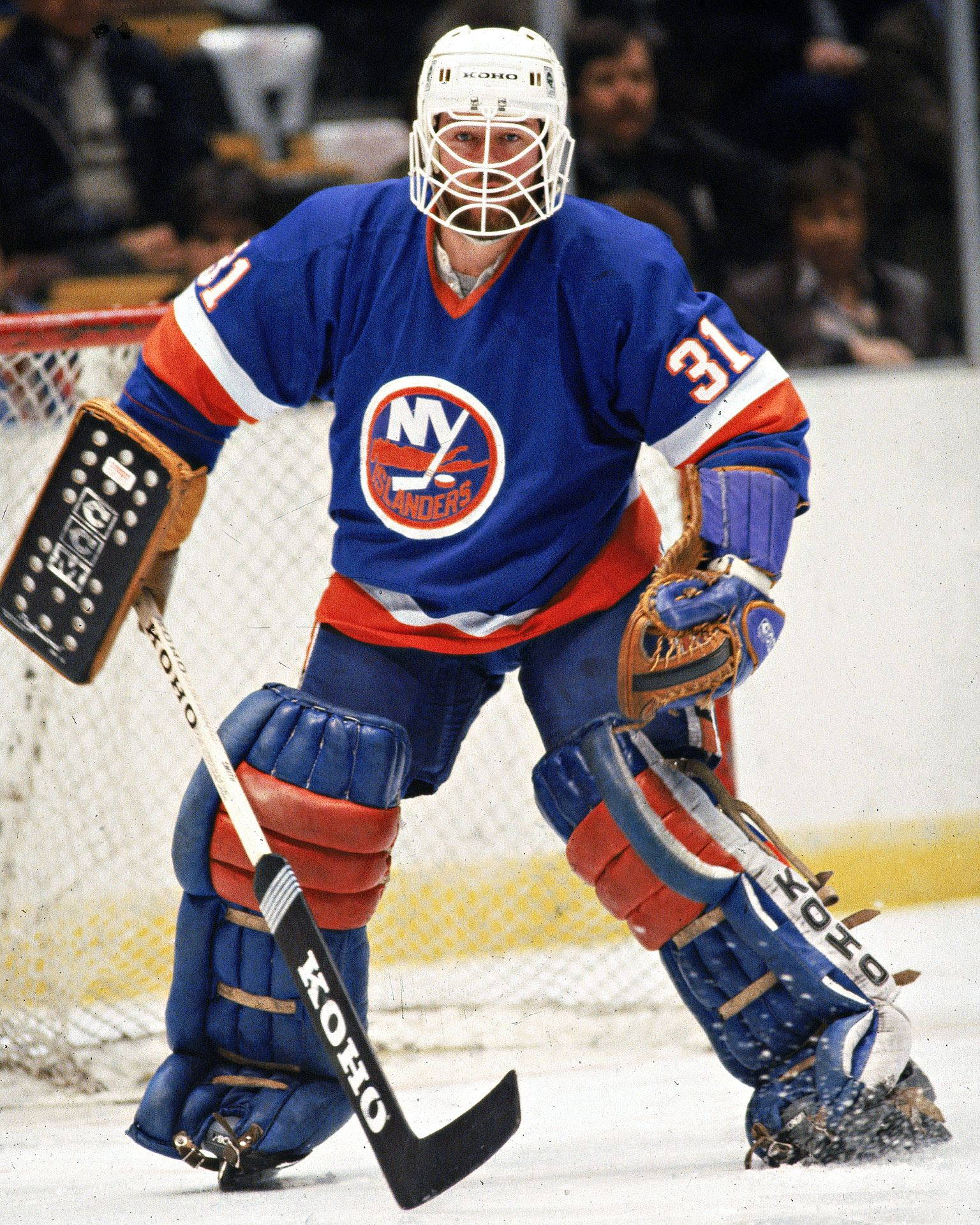 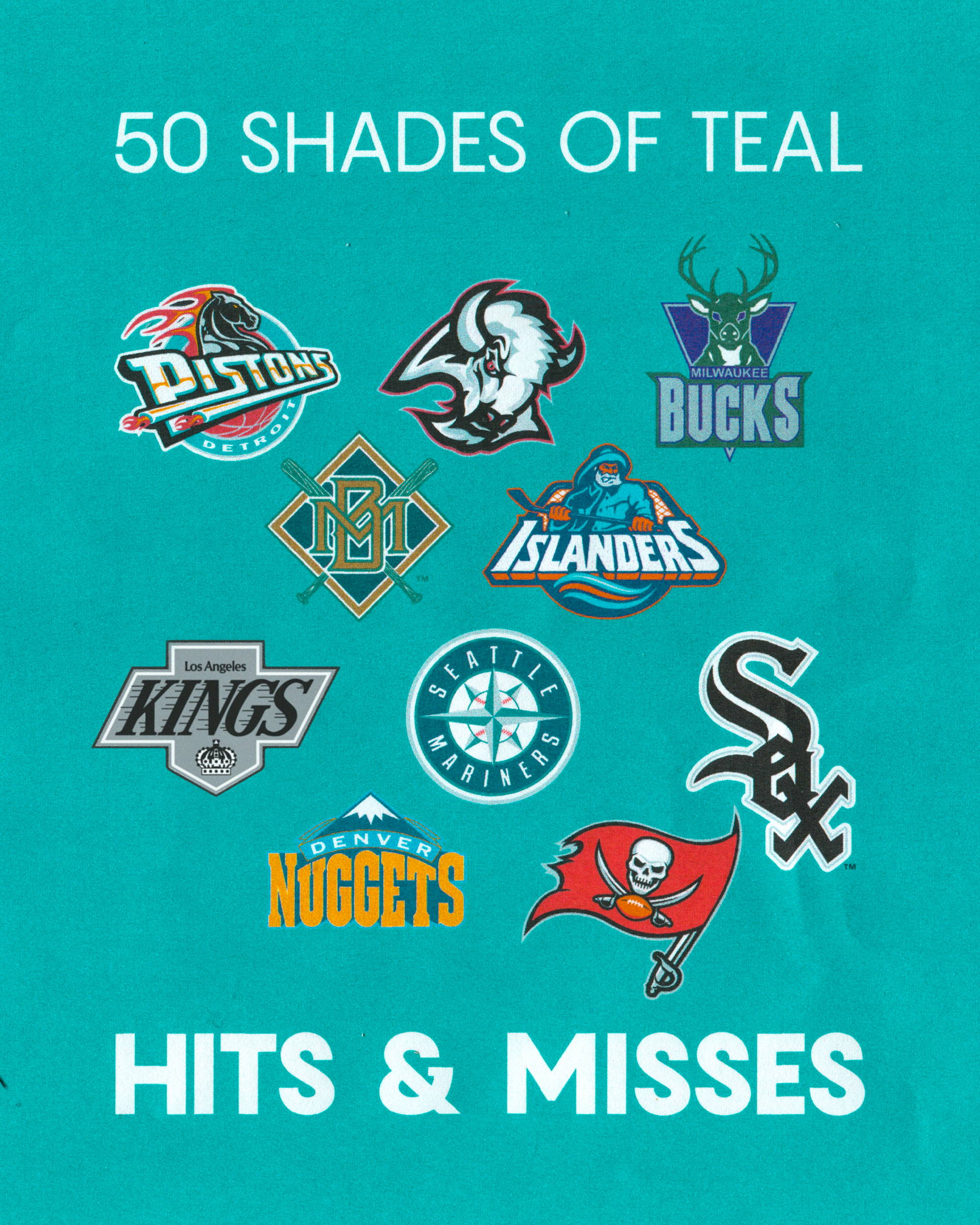